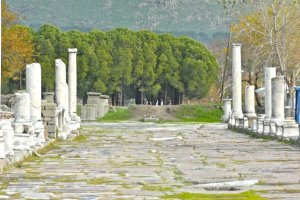 I made the journey to Asclepion in Turkey to commune with Galen–the man (for better or worse) who is credited with being the father of Western medicine. I travelled the well-worn path that other pilgrims took when they were seeking a cure. And for a moment, I joined these collective souls at the shrine to western medicine.

There was the familiar snake, a sign of rebirth. Looking at the symbol, being in this place I strained to hear any whisper of the healers or the healed. The voices of the past were deaf to my ears.

But it was on the hill above at Pergamon, the site of an ancient library that rivaled that of Alexandria that my senses were renewed.

My ears rejoiced at the sublime call to prayer across the valley and the amphitheater.

As I watched a simple nuthatch drink from the waters and eclipse history.  It was divine.