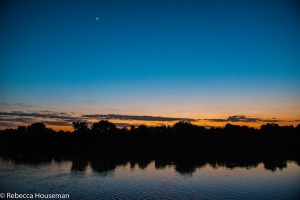 It was late afternoon in the Pantanal. We set out on the Piriqui River after viewing the fifth (and final) wild jaguar. We headed downriver to a fishing lodge where we were romanced with the Pantanal specialties— a pair of Bare-faced Curassows, a Ferruginous Pygmy-owl, a Chestnut-eared Aracari, and multiple Chestnut-bellied Guans. We followed the Hyacinth Macaws out of the lodge as dusk eclipsed us and headed back to the Flotel.

On the Amazon basin, there is a rhythm to the night’s descent. The Nacunda Nighthawks are the first to awaken. They are the bookends of the night as the hunt only at dusk and dawn. In between, they are more terrestrial-bound. As the river darkens, the bats will leave their roosts and the Potoos and owls will awaken. Night time has begun.

On this particular night, the southern constellations were shining in all their glory. I can remember only two other times in my life when the constellations were that outstanding—a trip to Yosemite to celebrate my entry into medical school. Overlaying the beauty of the Milky Way were feelings of ending an old life as a nurse and the beginning of a new life as a physician. The second experience was in Costa Rica at about a 10000 foot elevation where the birding group was searching in the cold of the night for a nighthawk. I looked up as was astounded by the beauty of the colors of the stars on a clear night at that latitude.

In the Pantanal, the Southern Cross showed itself in its austere beauty. The night sounds mixing with the color of the night sky made me feel as if I had again touched the divine.